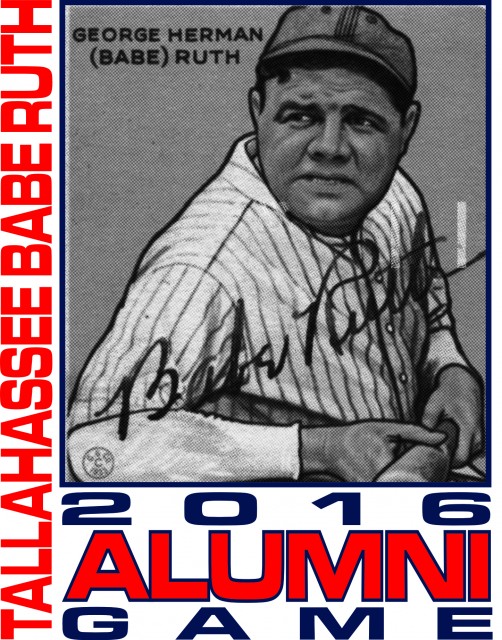 Click for a biography of each of the 2016 inductees.

An invitation to play in the alumni game was sent to all former players since its inception in 1954.  We had a full 7-inning game between the recent alumni and the old-timers.  The old-timers used numerous home runs en route to a 15-10 victory.  The highlight for the recent alumni was turning a triple play late in the game to give them a chance for a late comeback.  But, their final rally fell short.

A barbeque lunch was provided by Marsh Pit BBQ.  That was followed by the induction ceremony of the inaugural Tallahassee-Leon Babe Ruth Hall-of-Fame class.

The ceremony began with the national anthem, sung by Kaylee Owens.  Then, our emcee, Jim McNeil, introduced the Hall-of-Fame Committee and Current Board.  Our HOF Chairperson, Cindy Meredith, said a few words about the league and its rich history.  Then, Jim recognized the vast World Series history of TLBR, its success on a national level, and the alumni by decades in attendance.  Jim also took a moment to acknowledge the three all-star teams from last year.  Each won their respective state tournament, and the 15u team advanced to the world series where they finished tied for 3rd.  Many of the young men from all three teams, along with other current players, were in attendance along with their families.

Mitch Englert spoke about the old home of TLBR, Centennial Field, which was located where the current Cascades Park now exists.  Then, Jim introduced each of the 2016 Hall-of-Fame inductees and read a biography of their accomplishments.  Each inductee, or their representative, was given the opportunity to say a few words.

Please visit the Alumni and Hall of Fame section on this website for pictures of the event and full biographies of the inductees.