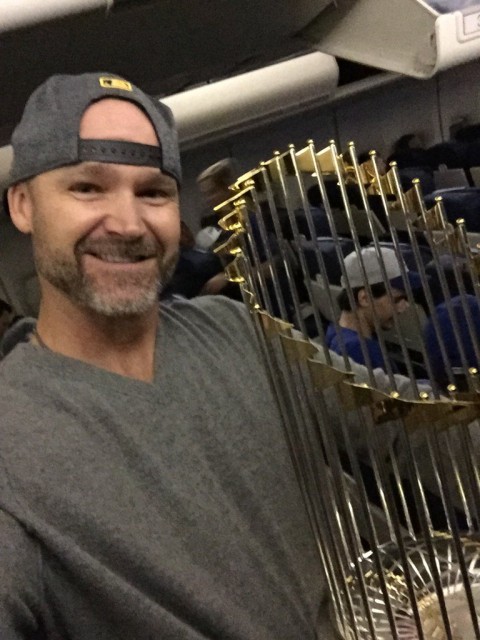 Alumni of Tallahassee-Leon Babe Ruth Baseball have pursued successful professional careers in a variety of fields.

David Ross is one of those players.

And the ending to his 15-year career in the major leagues could not have been scripted any better if it had been hand-written in Hollywood.

The Chicago Cubs catcher and former Florida High standout won his second World Series ring when the Chicago Cubs beat the Cleveland Indians 8-7 in a memorable Game 7 to close out the 2016 season.

It was the organization’s first World Series title in 108 years.

The 39-year-old Ross also became the oldest player in major-league history to hit a home run in a winner-take-all World Series game when he connected on solo shot in the sixth inning of Game 7.

When the game ended, Ross climbed over the dugout railing and rushed on the field for a celebration that erased more than a century of disappointment for the organization and Cubs fans.

Following the Series, Ross and the team were honored in a parade and rally through downtown Chicago that attracted an estimated five million fans.

And before Ross and his family could return to their Tallahassee home, David was scheduled for guest appearances on “Saturday Night Live” and “The Ellen DeGeneres Show.”

Ross helped the Boston Red Sox win a World Series title in 2013, but he could have never envisioned a better ending to his professional career than what transpired over his final two seasons in Chicago.

The popular player enjoyed a year-long retirement party with the Cubs in 2016, and was nicknamed "Grandpa Rossy" by his young teammates during spring training.

There was a T-shirt for sale that depicted the catchy phrase and reminded Ross of his impending retirement.

Ross also fulfilled a promise he made to himself – making sure he savored all the moments during his last year, writing down his thoughts in a diary he started in spring training.

For Ross, it was a season of Disney World highlights and memories.

He caught his first no-hitter, knocked in his 300th career run and hit his 100th career home run.

At home games at Wrigley Fields, fans serenaded him with his walkup song, “Forever Young” or pleaded for “One More Year.”

And during the Cubs’ final game at Wrigley Field in 2016, in Game 5 of the World Series, singer Eddie Vedder of Pearl Jam dedicated the ceremonial “Take Me Out To the Ball Game” during the seventh-inning stretch to Ross.

Ross played with seven different organizations in the major leagues, compiling 2,280 career at-bats over 883 games. He finished with a career batting average of .229 with 106 home runs and 314 RBI.

He’s also one of the few players to have won World Series titles in college and major-league baseball.

Statistics and numbers aside, intangibles played an important role in Ross’ success.

Known as an outstanding defensive catcher and leader, his Cubs teammates credited Ross with being the most valuable piece to their World Series puzzle.

During an on-the-field interview following Game 7 in Cleveland, Ross’ teammates came from behind him, lifted him on their shoulders and carried him off the field as a World Series champion.

And into retirement in style.

Ross, who resides in Tallahassee, is married to Hyla, and the couple has three children – Landri, Cole and Harper.